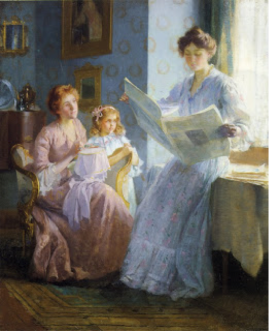 In this image we see two beautiful women and a young girl. One woman is reading a newspaper while sitting in the sunlight while the other woman is sewing. Both the woman sewing and the little girl are looking at the woman reading the newspaper. This image is highly symbolic. The woman reading the newspaper is representative of the idea of woman being actively involved in the world in a way that had once only been available to men. The fact that she is bathed in sunlight and raised higher and that the other woman and the girl look up at her is of a society wide change in women’s roles, and that that a woman who actively participates in society is becoming idealized. This is a central topic in stories like The Awakening by Kate Chopin. The central character in that story spent the entirety of the story trying to expand the roles of women.