“Kill Claudio” is a phrase that should surprise many people. After seeing it in the text, I was shocked, but I was even more shocked when we get to see the movie. It was interesting because this is when Benedick is proposing his love to Beatrice and it was after a tragic moment in Beatrice’s family. Benedick tries to prove that he really loves Beatrice, so he promises that he would do anything for her. In my mind, I would expect a mild answer like, convincing Claudio to forgive Hero, but I never expect such a strong phrase like “kill Claudio”. This proves two things, first it shows that Beatrice accepts Benedick’s love and she loves him too. Secondly, it proves that Beatrice is still extremely mad at Claudio and she couldn’t believe what happened, that’s why she is making bad decisions and order Benedick to try to kill Claudio. 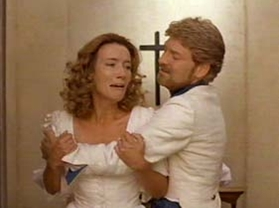