The Good Father vs. The Bad Father

For my project I chose to illustrate the father son plot. Pap and Jim are both father figures to Huck, but they are two completely different men. On the black side of the man’s figure is representing the good father, Jim. There are quotations from the text showing how Jim was a good father and friend to Huck. At the bottom there are also adjectives describing each of Huck’s fathers. On the white side of the figure’s body represents the bad father, Pap. On the side of Pap there are quotations justifying the adjectives describing him below. In this artwork I tempted to show that Jim is the good and Pap is the bad. Twain challenges the stereotype that black is bad and white is good but in reality, to this story, it is the opposite. During this time period the stereotype was that white people were good and black people were bad. Twain did not believe in this racist stereotype so he went against the norm of the time and challenged it by writing this novel. Black is good and white is bad, represented by Jim and Pap. I displayed what Twain believed and challenged in my artwork.

The benefits of doing this project were thinking about other perspectives of how Twain’s work could be interpreted. There were so many ideas that I thought of doing but had to limit to only one. Having so many options and choices to choose from the endless possibilities of art styles is a great way to truly dive into a novel and understand it to its full potential. By having no boundaries or limitations to this type of assessment is greater than writing an essay. 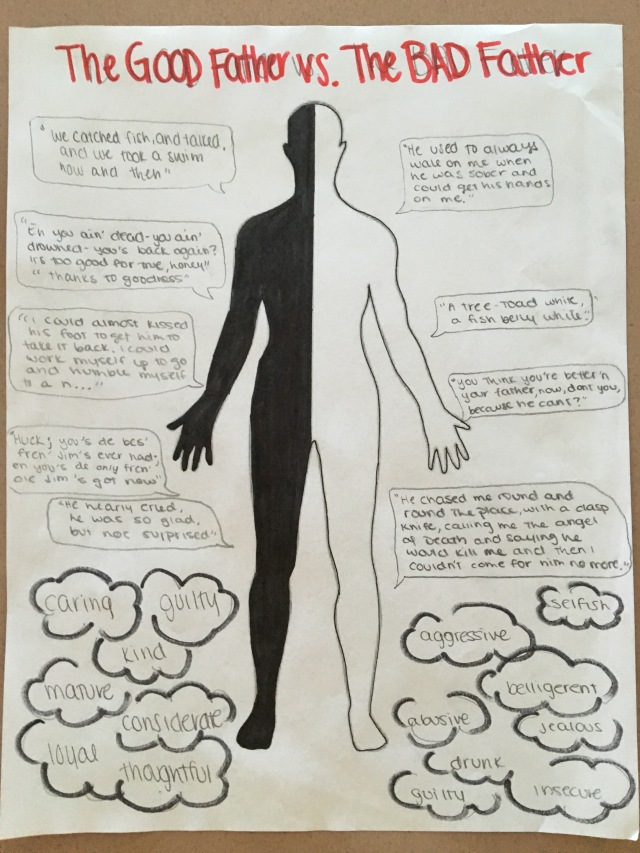 This entry was posted in Alternative Assessment for Twain 2016. Bookmark the permalink.

1 Response to The Good Father vs. The Bad Father