The Overt Destruction of Reconstruction 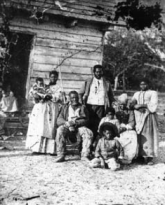 A family of slaves living and working on a farm

As a young child growing up, Mark Twain had many experiences that shaped his life, views, and political beliefs, many of which made their way into various pieces of literature. One of the most prominent and vivid experiences he had comes from witnessing a family of slaves chained together, about to be split apart and sold to different owners. They appeared weak, sad, depressed, and all around distraught that they were no longer going to be with each other. Twain was so deeply struck by this that his views on race and slavery were permanently altered. Twain, growing up with the institution of slavery ensconced in his culture, already had the idea in his head that slavery was a negative aspect of America; however, this experience forced him to look into the eye of America’s darkest detriment and truly understand what plagued the world beyond sickness, warfare, and economic depression. Later in his life, when he was writing The Adventures of Huckleberry Finn, he found that he could warp this memory into a lasting idea that would circulate around the world for an indefinite amount of time and truly speak to people of any age. So, in the process of creating Jim, he decided to make the reason that Jim runs away from Miss Watson was because she was going to sell him to another owner. She was going to split him apart from his job, the only thing that he could possibly cling on to in his life, being a slave, and force him to try and listen to someone else he cannot possibly trust.

A family being torn apart and sold into slavery

When families are split apart, there is heartbreak, crying, screaming, and depression. Since Jim has so little to hold precious, he gives everything he has a greater and more substantive meaning, such as he does with the “magic hairball” in the beginning of the book. People are desperate creatures who scramble to find sentiment and meaning in objectively ordinary occurrences, and Twain effectively shows that when someone loses that meaning and hope they so desperately searched for, they have nothing left.

This entry was posted in Ken Burns Twain Biography 2017. Bookmark the permalink.

1 Response to The Overt Destruction of Reconstruction