A Pioneer of Prosperity 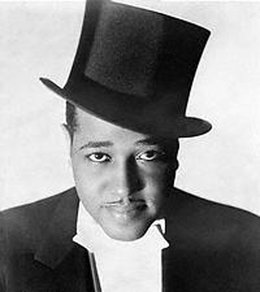 Ellington, seen here in his traditional conductor’s outfit, was a leading force in the Harlem Renaissance

Duke Ellington’s impact on the Harlem Renaissance is of the utmost importance not only to his time period, but music as a whole.  Introducing zesty jazz grooves that accompanied the booming sound of a full live band, Ellington incorporated different genres of music to create a smooth, flowing sound.  Ellington hired only the best jazz musicians to perform his pieces, holding everyone, including himself, to a high standard.  Ellington was a mogul among struggling African-Americans, proving to them that anyone could succeed as long as they worked hard and stood your ground.  Ellington also used modernism to express his innermost emotions in his music.  Perhaps his most famous song is “Take the A Train,” which intently incorporates the use of a modernistic sound.  Ellington wanted to capture the flare of the Harlem renaissance in this song.  He fused together jazz and even Beethoven-like orchestra pieces to create what some have called “the perfect jazz song.   Although Ellington intentionally presented puzzling features in his music to the listener, but the real mystery was his music.  Ellington was at one point considered “avant-garde” because of his use of a combination of an orchestra and a jazz band.  This revolutionary sound baffled listeners at the time.  They were used to the licks of mainstream jazz musicians, such as Benny Goodman.  Ellington revolutionized the jazz genre, and proved to people everywhere that he was a force to be reckoned with.

This entry was posted in Harlem Renaissance. Bookmark the permalink.